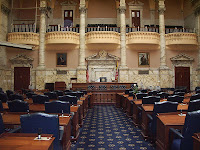 There are some upcoming 2013 Maryland House of Delegates bills that are worth keeping an eye on.  Here are a few of them to consider as they relate to our liberties:


House Bill 1 - Banning Synthetic Marijuana
Listing cannabimimetic agents as Schedule I substances that may not be legally used,  possessed, or distributed.

House Bill 4 - Licensed Breweries Selling Beer
This bill would allow licensed breweries to sell beer for on-site consumption, without the current sample size, and brewery tour requirements.  However, it would limit the total volume sold to no more than 6000 barrels annually.

House Bill 17 - Open Primary Elections
This bill would allow voters to register to vote on the day of a primary election.  Effectively, this would let voters choose which party primary to vote in, on the day of the election; having an effect similar to that of an open primary.

House Bill 18 - Growlers In Anne Arundel County
This bill would allow certain bars and restaurants to sell and refill large beer containers, aka growlers, provided they meet a number of requirements.

House Bill 38 - Concealed Carry Handgun Permits
Repealing the requirement that a person have a "good and substantial reason" to carry a handgun and replacing it with a training requirement.

House Bill 59 - Dedicated State Funds Protection Act
Money set aside in Maryland for specific purposes, such as bay restoration, or road construction, have, in previous years, been taken from those funds, to instead be used to balance the General Fund.  This bill attempts to stop this from happening.

For more information, you can also see the complete list of legislation introduced at the House for 2013.   You can also read the list of Maryland Senate Bills introduced for 2013.  For those who are new to watching our State government, here's a primer on Maryland's legislative process.